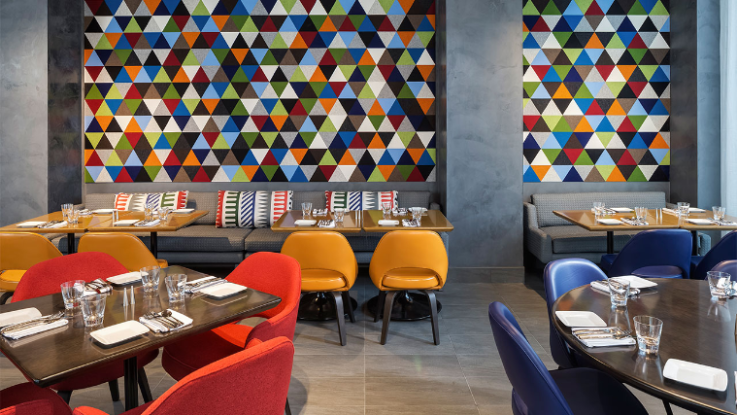 Talking with Chef Paul Lynch of the Urbana Craeft Kitchen & Market in the Hyatt Regency near Mall of America made the whole restaurant come alive for me. His version of a three-in-one concept is truly the wave of the future for hotel food and beverage. “Craeft,” by the way, is the old English spelling of “craft,” which translates into strength, skill, art, made by hand.

Lynch already made his mark on the hospitality world as the creative chef of FireLake Grill House & Cocktail Bar in the Radisson Blu in downtown Minneapolis and the hugely successful one at the Mall of America. When he joined the company that owns and manages the Hyatt Regency in Bloomington, he was given the responsibility for creating something new and unique. Urbana Craeft Kitchen & Market is just that.

While it’s easy to spot the hotel, there is no obvious sign for the restaurant and no dedicated parking lot. We had to wander through the hotel to find the restaurant. There is an outdoor sign, but it’s tucked away on the side of the building and the separate entrance is through its outdoor seating at the rear of the building. Key to a hotel restaurant’s success is to have outside signage, and in many cases, a separate entrance with nearby parking.

If you approach the restaurant from the lobby, as we did, you first see the bar with additional tables for dining. As you continue, you’ll spot a modern looking grab ‘n go, fast-casual area, and then a more formal dining room and patio area that overlook a park-like setting. They have blended all of these dining experiences into one menu. What’s noteworthy is the hotel is located near a medical facility, a light-rail stop and neighboring condos. So while it’s the in-house dining for Hyatt, it can also attract guests from outside the hotel.

The furniture is akin to upscale IKEA, while the dining room is inviting, it hasn’t captured the ambiance of fine dining. There is reasonable separation of space if guests want a true dining room experience where they can order a three-course meal. To cater to the divergent population of a hotel, they have included all types of seating, including high-top tables.

Revenue
There is a lot of potential. Because everything is locally sourced and cooked from scratch, food costs are in the low 20 percent range, according to Lynch. Labor is a little more problematic. When the restaurant works itself into a proper volume, labor will take care of itself.

Lynch thinks the hotel will do approximately $4.5 million total, with the restaurant ringing up about $2 million. The assumption is that by year three they’ll have combined revenue of around $8 million. Lynch estimates the restaurant will move up to $2.45 million next year. The hotel room rates are such that it should attract well-heeled guests and generate the expected revenue.

Additional revenue sources are room service and banquet facilities. There’s a large ballroom that seats 600, plus a smaller one equipped to handle 140, and other private rooms. They can also accommodate weddings outside in the green space, which is actually wedding-worthy. Underneath the tent will seat 400, while outside they can host up to 1,000 people.
Rating: 4 out of 4 stars for multiple revenue streams

Capital Investment
Since it’s a hotel, the capital investment isn’t as clear-cut as a standalone restaurant, so I’m skipping it this time. The restaurant, more or less, shares the decorating of the hotel chain, as well as the facilities, such as restrooms, so while the ambiance is upscale hotel, the artwork is institutional, rather than local artists or numbered prints.

Food and Food Costs
Lynch’s vision for the restaurant was a European feel, and Urbana Craeft has high-quality food that will resonate with Minnesota’s Scandinavian heritage. The “Craeft” in its name represents not only Old English, but also the countries of northern Europe.

I particularly like that all three dining areas share the same menu. The menu is mammoth—everything from wraps to small plates (called “Beginnings”) to entrées. Since the menu also services the bar, it’s heavy on appetizer-style dishes, plus burgers.

Starters, such as the walleye cheek lettuce wraps ($14), flatbreads, and fondue ($9), work equally well as appetizers or bar food. They have an “interesting” burger called Knife & Fork “Biff Lindstrom” for $14, with pickles, capers, onions, root vegetables, a fried egg and spinach salad on grilled Danish rye. While the Urbana is not advertising itself as a farm-fresh concept, 90 percent of the food served is from Minnesota.

A unique feature that you don’t find at many (if any) hotel restaurants is Urbana has its own garden. Across the parking lot, Lynch has planted a small garden on hay bales, which lessens the need for tending it. He also has a large personal garden, from which he shares produce. The menu has a section at the bottom titled “Taste of Place” where it lists the Minnesota Roots & Regional Partners, such as Stickney Hill Dairy, three different cheese places, Wild Acres, Robs Gourmet Greens, Pepin Heights and Red Lake Nation. I wonder if it is too much for the hotel, since it may not resonate as much with out-of-state diners.

Menu items from the garden are highlighted in green on the menu. Everything from golden beans to broccoli, heirloom baby tomatoes, lettuce and wax beans. Most is locally sourced except for the wine.

The bar food is the typical fare, burgers, chili, panini sandwiches, soups and market salads. Salads and sandwiches are prepared for the grab ‘n go, as well. Entrées, which are more likely to be ordered in the dining room, include brick chicken, Scandinavian meatballs, walleye, buffalo and salmon. There are safe harbors, as well as some more daring fare.

As a restaurant in a hotel, they have one more avenue to making money: room service. Delivering food to rooms is no longer the rolled-cart and chafing dish presentation. Meals are delivered in to-go bags, similar to how restaurants serve their carryout items.
Rating: 3 out of 4 stars

Service
The service in the dining room was outstanding. The server was friendly, but not overly involved (as in sitting down to join you). Everything at the grab ‘n go is accessible. (This can also be considered a coffee spot with treats, as well as a snack concept.) And the bar area also had a friendly ambiance. On our visits, it wasn’t busy in the restaurant; however, the bar was hosting a reception for a group at the hotel for a conference—a welcome stream of income.
Rating: 3 out of 4

From what I saw, I really like what Lynch has come up with. However, it’s a new concept that still requires guests’ buy in, but in this world of something for everyone, it seems to be on the right track. The food is interesting and the private garden makes a compelling story to share with guests.
Overall Rating: 3 stars out of 4

By Dennis Monroe
From the November 2016 issue of Foodservice News