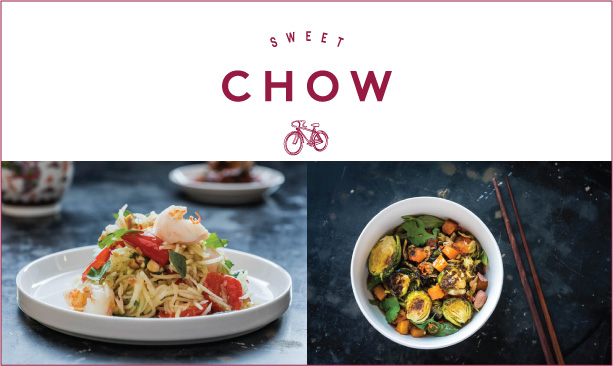 I am always intrigued by “polished fast-casual” concepts— restaurants with counter service but a little more personal service and also higher price points that can attract customers with the ability to generate higher check averages. Sweet Chow is an example of one of these great, new, polished fast-casual concepts. It has a great location in the north loop, a very hot spot right now, next to Red Cow and across from Whole Foods. The long, narrow footprint gives it the appearance of a food hall with a modern twist on Asian decor with fun hanging light fixtures, a dropped ceiling over the bar, which, by the way, is a full bar, and an open kitchen in the back surrounded by a counter with seats. All of these features lend themselves to an extremely fun experience for the fast-casual consumer.

This restaurant was the brainchild of three individuals: Ami Francis, her mother, Julie Hartley, and a friend, Greg Cummins. Hartley, her husband and Cummins did substantial biking tours of Thailand and fell in love with Thai street food. When they returned to Minneapolis, they thought there was a great opportunity to bring these tastes to the city. They found a 4,000-square-foot site and did a lot of the design themselves, inspired by what they had seen in Thailand. They used ESG to complete the project. In addition to the existing space, they also have made room for other profit centers. The one driving force Cummins stated they wanted was street food, but not junky street food. It is an understatement to say the food has a lot of class.

Revenue
As it relates to potential revenue, I couldn’t get Cummins to commit to what they think the revenue is going to be. I would guess they could do $2 million, particularly when they have the patio and the ice cream counter in place. The space itself elicits a classy response, which in terms of repeat customers will help to attract those who will provide higher check averages. The restaurant was only three weeks old at press time, so Cummins didn’t want to say, but it looks to me like the check average per customer is going to be about $30, which for a fast-casual restaurant is incredibly good. They also have hired two management pros from Café Alma, Executive Chef John Krattenmaker and GM Savannah Rose, who know how to run reasonably high-volume restaurants.

The menu, which is both posted on a board above the registers and printed (to save neck strain) has a number of starters, smaller plates, entrées and sandwiches all in the $12 to $18 range, plus a full range of cocktails, wine and beer. Looking to a $30 check average, from a pricing standpoint and product selection, they have set themselves up to achieve this reasonably high check average. Additionally, the food itself seems to fit the North Loop and the current dining trends. From my count, there are 84 seats in the restaurant. The outside patio should be able to seat an additional 24 people, according to Cummins. If they decide to put in a bike rack, that number may go down to 20. The front area off to the right as you walk in—a beautiful area with windows—will become a little ice cream shop with exotic ice cream flavors to tie in with their foods.

Unlike many of their fast-casual brethren, Sweet Chow seems to have cracked the code of nighttime sales. They have food offerings that translate well to dinner and carry-out—or as they like to say “takeaway”—and they are developing a lunch business. The bar also could easily attract nearby residents who want a place to meet friends for a drink.
Rating: 3.25 out of 4 stars.

Food Cost
The restaurant is early on in its development and I couldn’t really get any indication of food cost from Cummins or from Rose (the general manager), but given the menu mix and the ability to drive cocktail business, the food and liquor cost should be in a fairly reasonable range. I would estimate 30 percent. Because of trial and some of the uniqueness of the products, they are probably running higher than that but there is no reason they can’t maintain appropriate food cost. While the dishes have quite a bit of protein, there are still enough low-cost ingredients that should keep a lower food cost. In addition, the protein used is lower-cost cuts of beef, chicken and cod so they really aren’t overspending on the most expensive aspects to food cost. Because it is early stages, their rating is lower than it will be in six months.
Rating: 2.5 out of 4 stars.

Labor Cost
It’s hard to know what the labor cost is going to finally shake out at. I do know the service now is at a high level, but because the bar isn’t being fully utilized yet, and you do have to maintain labor for the bar as well as front of the house, back of the house and moderate table interaction, I think labor is probably on the high side. That is OK because they have only been open three weeks. If this holds true to the normal fast casual, their labor prices should come down and should be in the normal range below 30 percent. I believe right now, because of the early stages and because they are learning the menu and they’ve got other things to develop, such as the patio and the ice cream service, that for the first year labor is going to be pretty high for a fast casual restaurant. There is always a trade-off when you are trying to attract customers, particularly the discerning North Loop crowd. While I’m conservative on labor cost in my rating, I do want to add that in three or four times I’ve dined there, the “limited service” has been on par with some really nice full-service places.
Rating: 2.5 out of 4 stars.

Return on Investment and Capital Improvements
I couldn’t get a final number out of Cummins as it relates to investment, but I estimate the investment was somewhere between $1 million and $1.2 million. They have a beautiful kitchen, bar, and the leasehold buildout is very nice. It is not the normal industrial North Loop look, and it has a warm feeling, but those warm feelings don’t come cheap. Rent in the North Loop is not cheap, but say they do a $2 million volume with lower than the 20+% margins I like to see, they should be able to get in that 15-20 percent return on the overall investment.
Rating: 2.5 out of 4 stars.

Overall Rating
If they keep executing the way they are, the food itself really hits the sweet spot— this is Minnesota Southeast Asian. It’s not over-the-top hot, it has the right amount of sweetness. It also has some safe harbors, particularly the wings and the fried rice. And it is a very user-friendly restaurant. With the addition of the ice cream place and the patio, it should be a real hit. I do believe this is something that is a new trend. It reminds me somewhat of the things the owners are doing at Agra Culture, but with ethnic foods. And good management, which Sweet Chow has, always helps significantly to make a successful business.
Rating: 3 out of 4 stars.

From the April 2018 issue of Foodservice News