Just over two years ago, Blake Verdon and Jeremy Hale left their corporate jobs to pursue the dream of starting their own brewery and taproom. On June 4, 2014, their efforts came to fruition when LTD Brewing Co. in Hopkins, MN, opened its doors. We caught up with Blake to find out what they have learned thus far in operating their business.

What’s met your expectations or surprised you now that you have operated the brewery for nearly two years?

There was really no way to predict the amount of work required just to get LTD Brewing open, so we tried to be realistic in our expectations. But it was still an insane amount of work, much more than we anticipated. Now that we’ve gained more experience, we see how greatly we underestimated the demand when we first opened. We had projections that 50% of our capacity would go via distribution – sales to tap accounts or liquor stores. Yet we started running out of beer just in the taproom almost immediately and had to add capacity right away. So first year, demand exceeded our expectations and then some.

The amount of extra cost was also a surprise, just in terms of branding, licensing and registration through state and federal agencies. We’ve brewed over ninety beers now, and every year we have to pay branding fees for them. It adds up.

We’re looking to expand capacity again, by 30% to do more in distribution, bottling and tap sales, to make sure that bars, restaurants and liquor stores that like our beer can always count on a steady supply.

What kind of clientele have you been seeing? Any surprises there?

Yes, especially in the taproom. We projected our demographic to be mostly younger male professionals – but it turns out to be entirely across the board, pretty much from 21 up (and some younger ones, too, since we serve root beer). It’s very much in line with the general population, and no particular group predominates, whether you categorize by age or gender. 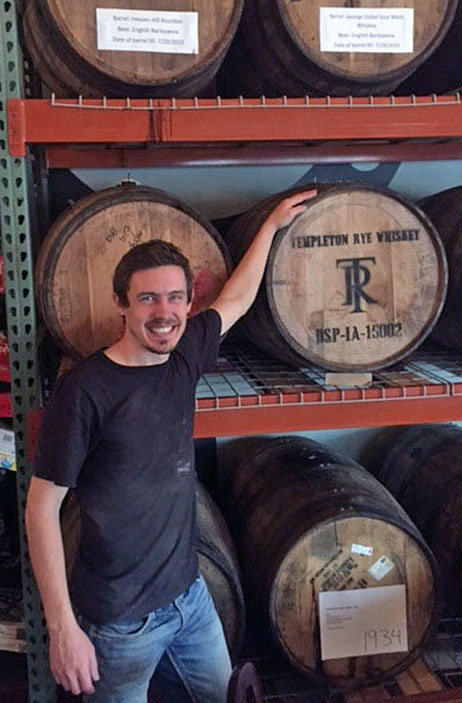 Where do they mostly come from?

It’s a great mix. We have an awesome local base, because we’re so close to neighborhoods, and there’s a lot of density close to the brewery. But we also get people traveling from the Dakotas, Wisconsin, Iowa, etc. on beer tours, and folks from the surrounding metro area. I would say it’s 50% from nearby cities and 50% from all over the state and out of state. It’s incredible.

With more than 90 different beers throughout the year, you’re pretty experimental. Was that your approach from the start?

Absolutely – that’s our chosen model of operation. We wanted to rotate beers continuously while having certain general styles always available – so you’ll always be able to get some type of IPA, some type of stout, porter, and something a little lighter and approachable. We’re starting to get more and more demand for having a few staples available all the time. So we more or less have a house stout; we rotate between two IPAs; we have a brown or an amber; and we typically have the same light beer on tap just about all the time.

What are the bars and restaurants asking for?

Our model is seasonal and rotational, so at first many were hesitant to go along with our strategy, because it’s tough for them to keep their staff informed and well-versed in describing the new, seasonal offerings we brew. The upside is that being able to sample and talk about new offerings is something their customers seem to be pushing for, so the reception has been great out on tap. When the customers start to understand that we operate on a rotational basis, they like to know what we have for that particular time of year, and they’re always ready to try something new.

Aside from capacity, what are your other biggest challenges?

Because we brew just about every style you could imagine, having to order and maintain a supply of ingredients needed to execute those styles is a challenge. When we need to put together hop contracts, guessing what we want to use four years from now is really tough, since we’re constantly changing our offerings. It’s really hard to maintain the supply of specialty hops that make great IPAs: a lot of them are patented, trademarked varieties; the supply is controlled, and you can only get it from certain sources I know a lot of breweries, especially ones just starting out, are finding it hard to get the right ingredients, and often the only way is to pay a premium to someone who maybe had ordered more than they needed. There’s a huge secondary commodities market for those products, and the prices are always changing depending on crop season. Breweries try to dump off excess supply at the beginning of the new crop season – so you’ll see an influx of supply at the start of the year; but then you’d see the supply dry up as the year goes on. You have to learn to plan accordingly, and there’s always an element of a gamble to it.

What’s the appetite of the customers? Are there certain beers that are more popular than others?

In Minnesota it’s IPAs – by far the number one style. They outsell everything else by about 40%. So, compared to the other beers we brew, we have to double our IPA production just to keep up with the demand. There are all kinds of regional variations. In North Carolina, for example, the focus is much more on German- or Belgian-style beers. Someone told me that Bell’s sells more of its Two-Hearted Ale in Minnesota than in Michigan. I guess we have a long tradition of fine IPAs in Minnesota, going back to Summit’s Extra Pale Ale – so this ingrained preference is not a surprise, and we anticipated it when we opened.

What kind of growth opportunities do you see for LTD Brewing?

As I mentioned earlier, we are looking to expand to add capacity. Currently, we have an eight-barrel kettle and a mash tun that’s about double the size of our system, allowing us to produce brews that require a lot of grain space. We have 56 barrels of fermenting capacity and about the same in bright tank space. So this year we’re projecting to do about 650 barrels, which is up from about 525 barrels in our first full year. The year after, we’re looking to be on pace for 800 barrels.

We always wanted to do a mixture of tap accounts and liquor stores, because if you have something on tap, you also want to have it in bottle form. Right now tap accounts far outnumber our bottle sales. With our expansion plans, we’d like to bring back up that mix of distribution; and we’ve just started doing that with our limited 750 ml glass release. Sleepwalker, our triple IPA, was gone within two weeks. We had brewed a ton of it, bottled up just about all of it; but the bottles were gone before we could even get up to the demand of the liquor stores that had asked us for it. So we’re trying to expand in that area and have a more steady liquor store presence, because we have a steady presence in tap accounts in the surrounding areas. We’d also like to expand our distribution of barrel-aged beers.

You quit a corporate job to start a brewery. Any regrets?

I’m pretty happy with the decision. It’s definitely a lifestyle change. While I worked a ton of hours in the corporate world, having a taproom means I’m here all the time. You don’t have benefits like health insurance or 401K – you’re on the hook for all that, and you’re also responsible for your employees. So it’s definitely a different mindset. While I cared a lot about the company I worked for before, here it all falls on me, so there’s a lot more pressure to provide for everyone – not only my customers but also my employees. A lot more work, a lot more stress, but a very rewarding experience.